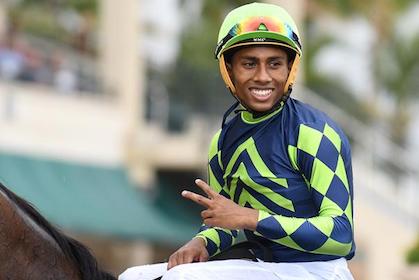 Two horsemen with roots in the Caribbean and strong families in the sport were among the headliners on Thursday’s program at Gulfstream Park.

Jockey Romero Maragh, 20, who comes from the famous Maragh family that hails from Jamaica, closed in on his 150th career win in the saddle on the North American circuit with a double, and reigning champion trainer Saffie Joseph Jr of Barbados prepared two winners on the eight-race card.

The wins for Maragh were his first in the new racing season, which opened on September 30 and closes on November 21, and placed him in the top 20 of the jockeys’ standings, and for Joseph propelled him to the top of trainers’ standings with eight wins.

Romero got into the frame with a half-length win aboard the 5-1 bet Lightening Larry in the U.S. $ 50,600-second race over six furlongs on the dirt, and he followed up with one-length win astride the 4-1 chance Robintakincharge in the U.S. $29,500 sixth race over 1,700 metres on the all-weather track.

Romero raced Lightening Larry up close just off the leader Muted, under Emisael Jaramillo, in the early stages and hustled the two-year-old, chestnut colt into the lane before he advanced his mount to challenge for the lead at the eighth pole and edged by Muted late to finish in one minute, 10.96 seconds.

Romero had a much easier ride on Robintakincharge, as the dark bay gelding set a pressured pace through the backstretch and came under pressure on the far turn and turning for home, but the five-year-old animal lived up to his name by shaking clear in the lane and holding firm to the wire for a new track record of 1 min, 46.89 secs.

Twelve Volt Man shared the lead with Big Thorn, under Jesus Rios, until the horses reached the final turn, where Zayas shook free the three-year-old, chestnut gelding under pressure at the top of the lane and kept him clear to finish in 1:35.17.

Zayas settled Spectacular Gal nicely through the early stages and moved up to take a slim lead at the quarter pole before the two-year-old, bay filly responded willingly when put to a drive turning for home and drew off through the lane for a time of a track record 1:47.12.