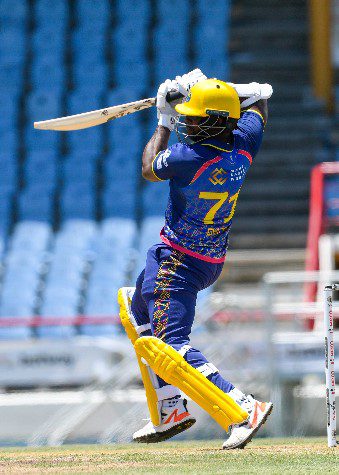 Azam Khan’s 64 from 52 balls was sufficient to see the dominant leaders to 156 for 3 off their 20 overs and seamer Nyeem Younger (3-5) and off-spinner Mujeeb Ur Rahman (3-18) produced three-wicket hauls to ship Patriots tumbling to 120 all out within the last over.

Despatched in on the Guyana Nationwide Stadium, a weakened Royals misplaced Rahkeem Cornwall (6) and Kyle Mayers (16) to be 46 for 2 within the eighth over.

Khan then revived the innings, thumping 5 fours and 5 sixes whereas inspiring a 102-run, third-wicket stand with Englishman Harry Tector who slammed 47 from 44 deliveries with three fours and two sixes.

In reply, Patriots appeared on track for the win when left-hander Evin Lewis lashed 41 off 36 balls with seven fours, posting 46 with Andre Fletcher (20) for the primary wicket and 26 for the second with Sherfane Rutherford (9).

As soon as Lewis perished firstly of the 14th over, dragging on an tried pull off Mujeeb, Patriots collapsed and misplaced their final seven wickets for 20 runs.